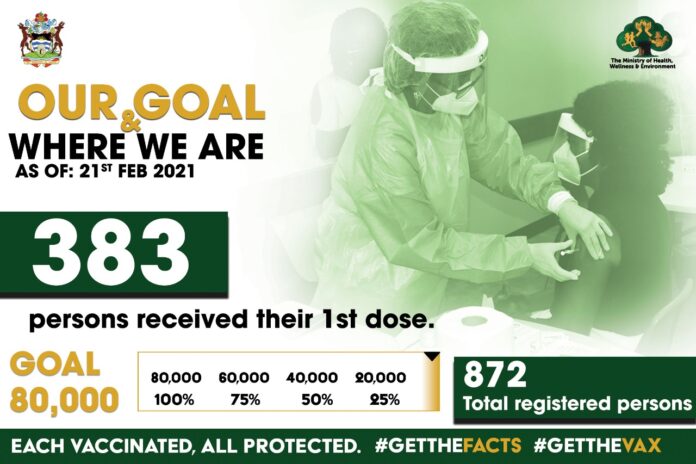 Antigua and Barbuda has taken a giant step in the fight against COVID-19, with the rollout of its AstraZeneca vaccine campaign.

During the period of Wednesday, February 17th and Sunday, February 21, 2021, three hundred and eighty-three (383) persons received their first dose of the vaccine.

On Thursday, February 18, the campaign continued when members of Cabinet rolled up their sleeves and took the jab before live television and social media audiences.

On Saturday, February 20, representatives of both the Upper and Lower Houses of Parliament availed themselves to be inoculated. They were joined by Antiguan and Barbudan Cricketing legends, including Sir Andy Roberts, Sir Curtley Ambrose and Sir Richie Richardson.

The second dose of the vaccine will be administered in 12 weeks.

In accordance with the list of priority, members of the armed forces are next in line to be vaccinated.

A registration site for the general public is expected to be announced shortly.

Another shipment of AstraZeneca vaccines will arrive on island by February 28, as part of the COVAX arrangement.

Here is our goal and where we are!

FEATURE: How Much Do You Know About Cervical Cancer?